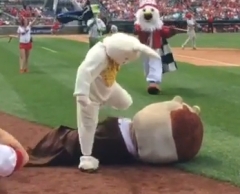 Two Nationals Park traditions literally collided on Sunday as the Washington Nationals celebrated Screech’s birthday with guest appearances by area mascots, and also celebrated Easter with an appearance by a certain bunny.

Each had a history of interfering with the fourth inning presidents race, but never on the same day. What followed wasn’t pretty.

George, Tom, Abe, and Teddy emerged from the centerfield gate wearing bunny ears, and Jefferson pulled ahead early, holding onto his lead until the presidents found themselves facing a sea of mascots in the home stretch.

That’s when Slapshot took a running leap over the back of fellow eagle Talon to nail the sage of Monticello with a head-butt.

Delaware’s YouDee then rammed in George Washington, smashing the father of our country’s face.

Finally Maryland’s Testudo stiff-armed Abe Lincoln, knocking off his ears and sending him to the ground.

The mascots then let Teddy Roosevelt run past, seemingly to secure his first victory of the season.

But alas, that’s when the Easter Bunny appeared from nowhere — or more accurately from the new Dugout Club section — and took down the Bull Moose with a vicious diving tackle.

Screech, repeating a scene from last season, waltzed across the finish line to steal the win.

Teddy, however, remains winless as the Nationals begin their road trip to Atlanta.

The Easter Bunny came out of nowhere! 😂 pic.twitter.com/fNtcthxjoP