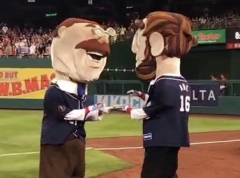 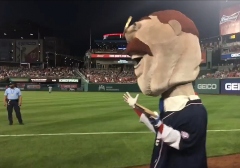 It’s only ten home games into the young season, but things are looking bad for racing president Theodore Roosevelt, who’s 0-for-10 and continues to see near-victories snatched from under him.

The Washington Nationals kicked off a homestand at Nationals Park on Friday, and apparently, when Abe Lincoln found out it was also National Blueberry Pie Day, it was all the excuse he needed to steal another race from the hero of San Juan Hill.

“Honest” Abe skipped the starting gate, and instead parked himself in Section 134A during the fourth inning race with a fresh blueberry pie.

Teddy carried a lead into the home stretch, but that’s when Lincoln appeared and stopped the Rough Rider to offer up some pie.

It was just enough of a distraction to allow the great emancipator to turn and dash for the finish line for his sixth victory of the season.

As we pointed out on opening day, the 2017 version of the Nationals presidents race is unfolding in a pattern that is eerily reminiscent of 2006-2012, when the team conspired to keep Teddy from winning a single race.