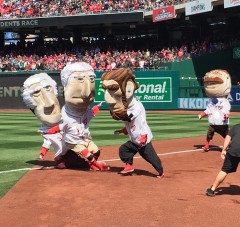 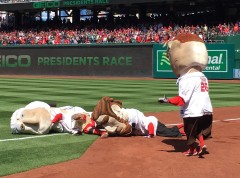 On a frigid opening day at Nationals Park, the Washington Nationals reversed course from last year and decided to let Teddy win, as racing president Theodore Roosevelt kicked off the season by snapping his multi-year, 86-game losing streak.

The MLB’s new pace-of-play initiatives leave little wiggle room for presidents race shenanigans, but the Nationals managed to squeeze in their fair share while Mets pitcher Jacob DeGrom warmed up for the bottom of the fourth inning.

Abe Lincoln parked himself on the sidelines under section 134 as Teddy, George Washington, and Thomas Jefferson began the race. Teddy fell behind the pack entering the home stretch, but that’s when the Great Emancipator, who so often has been TR’s nemesis, jumped out and clocked both George and Tom, clearing the way for a Roosevelt victory.

After he crossed the finish line to the cheers of the sellout crowd, a Secret Service Agent handed Teddy a putter. The Bull Moose than tapped in a putt on a makeshift hole and was handed a green jacket to commemorate today’s opening round of the Masters Tournament in Augusta, Georgia.