The Washington Nationals revealed their 2019 promotion/giveaway schedule today (weeks earlier than usual), featuring a bump in the number of popular bobblehead dolls that so many fans look forward to annually.

At a recent “hot stove” event for season plan holders, Nationals Senior VP Mike Shane said that Soto rejected early renderings of his bobblehead because he “wasn’t smiling.” So Soto’s doll, the first of the season, features a grinning #22. 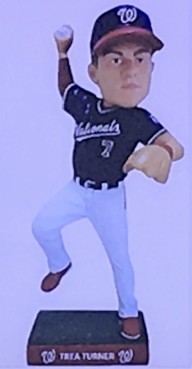 Nats bobblehead collectors can look forward to several firsts, including a Trea Turner bobblehead that is the first to feature the Nationals alternate blue “script Nationals” uniform.

On Marvel Super Hero Day May 25, Ryan Zimmerman will be featured on a “Captain Zimmerman” bobblehead that features a Captain America-style Curly W shield, and a Sean Doolittle bobblehead to be given out on Star Wars Day June 15 will feature the All-Star closer dressed as Obi “Sean” Kenobi, complete with Jedi robe and blue light saber.

Max Scherzer will be featured on the other bobblehead on June 21, and a previously-announced bobblehead day of September 13 has been changed to “PenFed Giveaway,” leaving open the possibility of a record eighth bobblehead doll.

Most Nats bobbleheads are produced in quantities of 25,000, but the special edition “Captain Zimmerman”and “Obi-Sean Kenobi” bobbleheads will be limited to the first 10,000 fans, so plan to queue up early.

The schedule features a record number of theme events that require a special event ticket purchase to participate. These include promotions such as Yoga in the Outfield, Ladies Night, Caturday, Pups in the Park, Taste of the World, Stich ‘N Pitch, Margaritaville night, and a new Father’s Day Catch on the Field.

The list also includes dozens of theme nights representing more than half of all home games for groups such as military branches, college alumni, scouts, teachers, youth baseball leagues, and first responders. These also require a special event ticket to sit with the honored group. Such events have been hugely popular in the past and are the focus of a Nationals marketing team looking to bring new audiences to the ball park.

After opening day features a t-shirt on March 28, expect die-hard fans to scramble for the second game giveaway on Saturday, March 30: a battery-operated radio lanyard that is permanently tuned to 106.7 The Fan and works only inside Nationals Park, with a promise of no delay and “enhanced gameday elements.” The item had been promised last season but delayed because the first batch did not meet the team’s standards.

The team will also give away an expandable beach bag (May 2), a Nationals water bottle (July 23), a racing presidents tote bag (July 27), a Nats camo tank (August 31), a PenFed giveaway TBD (September 13), a Nationals beer stein (September 14), and a Nationals puffy vest (September 29).

Additional giveaways reserved just for kids include a Washington Nationals kids watch on “Kids Opening Day” (April 28), when the team celebrates Screeches birthday and the park is teeming with mascots from other area teams and schools.

Other kids’ giveaways include a Max Scherzer Jersey (May 26), a Screech hooded towel (June 23), a Teddy Roosevelt squeezable toy (August 18), and a lumberjack cap (September 15). All kids’ giveaways are limited to the first 10,000 children age 12 and under.

For the third year, National season plan holders will be given the option of purchasing up to two “Guaranteed Giveaways” coupon books, which reserve one of each giveaway item to be picked up after the promotion date, whether or not you attend that game. In past years, Guaranteed Giveaway books cost $109 each.

Fireworks Fridays throughout the season, which disappeared in recent years, have returned for 2019 and are scheduled for April 26, May 24, June 14, and August 30. There will also be fireworks on Wednesday, July 3.

The team is also introducing three new food concessions for 2019:

A new concept called Taco Caminando will feature the “Walking Taco,” a 16 oz. cup filled with a belly bomb of corn chips, chili, cheese, diced tomatoes and sour cream (in other words, a rebranded Frito pie).

Giveaways below. Full schedule of special events and ticket offers at Nationals.com.

2 thoughts on “New food, seven bobbleheads, and the return of fireworks highlight Nationals changes and promotion schedule for 2019”