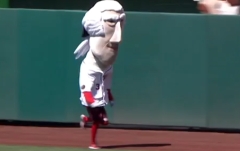 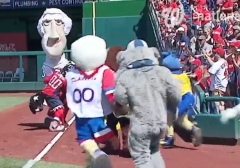 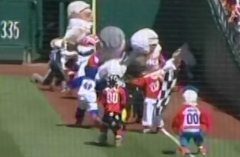 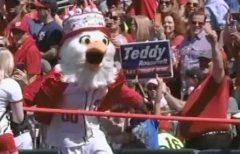 Sunday’s 16-inning marathon victory by the Nationals over the Minnesota Twins is already  being memorialized as one of the most epic and topsy-turvy games in Nats history, so it’s understandable that the game overshadowed what was also an epic and historic day in the pantheon of presidents races.

It was the annual “Kids Opening Day,” in which the team celebrates mascot Screech’s birthday, and other area mascots often show up to join in the fun.

In the fourth inning race, Thomas Jefferson emerged first and jumped out to a huge lead, but was met in the right field corner by a relentless onslaught of mascots, who jumped and pummeled him, with Navy mascot Bill the Goat repeatedly kicking the founding father on the ground.

When the other five presidents rounded the corner, the mascots got up and slammed into them all, then turned around and went back after Jefferson, who was body-slammed by Slapshot as he tried to get up.

Presidents race history was then made when Screech, who usually calls the winner from the finish line, took off and raced for the belt himself, marking only the third time a non-president has taken the tape*.

When the game went into the thirteenth inning, it was Jefferson’s chance for redemption. Wearing their traditional “Sunday best” uniforms for the first time this season, Jefferson ran away with the extra-innings win.

While the #Caps were clinching, Slapshot was body slamming the #Nats Thomas Jefferson https://t.co/iN4ig06iub pic.twitter.com/VPqqQN5aHt

Here’s the official video as called at Nats Park, followed by the TV coverage on MASN:


Note: Our usual finish line videographer lfahome was not in attendance, so I tried to shoot the finish line videos myself, and botched the job (for both races!). What he does is not so easy.