If Tuesday’s events were any indication of the season to come, then 2012 will be an exciting year at Nationals Park, both on an off the field.

Baseball returned to DC for the summer as the Washington Nationals hosted the Boston Red Sox for a pre-season exhibition game before hitting the road to start the regular season. The Nats and Sox produced plenty of fireworks, including a play at the plate that ended things for the home team in the bottom of the ninth. 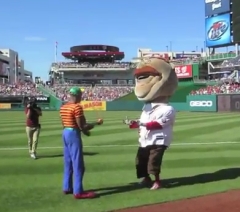 The Nationals racing presidents got in their final pre-season workout as well, running an exhibition race in the middle of the fourth inning.

Though it didn’t count in the standings, the mascot team pulled no punches, placing a bevy of distractions in the presidents’ way.

As the Rushmores entered the right field corner, a large Easter Bunny was waiting in ambush, managing to place a block on every president except Teddy Roosevelt, who dashed by to take the lead.

But Teddy’s advantage would be short-lived. The Rough Rider has an established weakness for jugglers, and two of them provided all the distraction he needed before he reached the finish line.

Teddy barely noticed as George Washington ran by for the win.

2 thoughts on “Video: Easter Bunny is no help for Teddy in 2012 presidents race warm-up”