In this Redskins-obsessed sports community, it’s fair to say that many people locally haven’t paid close attention to the Nationals’ amazing September. 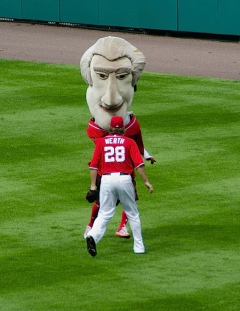 So it’s also not surprising that when people hear about Jayson Werth’s attempt to interfere with the presidents race, many who weren’t there assume it was a scripted gag.

But as we’ve known since May, Werth again made it clear to the Washington Post’s Adam Kilgore that he is a serious member of the Let Teddy Win movement.

The self-proclaimed “last member of the Bull Moose Party” is passionate about putting an end to any remnants of what he saw as “an expectancy of losing,” and while he believes the team has turned the corner, he sees Teddy’s losing streak as a remnant of that mentality.

“It was a joke on some levels, but on some levels not,” Werth told Kilgore. “There’s an expectancy of losing there. It goes back to the first month of the season when we won two games in a row and [a reporter] asked me about the two-game winning streak. It’s like, ‘No.’ That whole thing had to stop. That had to stop in a big way. When an organization or a team is really young and is coming from many losing seasons, it starts to get ingrained. I’m not saying that I’m the one who changed it. It’s got to be a conscious effort on everybody’s part. But I definitely wasn’t complacent when I saw that happening.”

It’s safe to say that Werth won’t be interfering with the presidents race again, but here’s hoping our new favorite National doesn’t drop his membership in the Bull Moose party. If Werth can recruit more players and fans to the cause, and the team does well, perhaps the pressure will build for the Nationals to let Teddy win in the 2012 season.