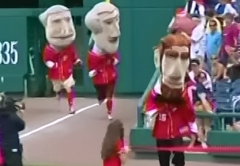 A day after revealing his displeasure that Teddy never wins, Nationals outfielder Jayson Werth clearly held hope that the Nationals had listened.

As George, Tom, Abe, and Teddy began the presidents race Saturday afternoon, the Nationals’ 126 million dollar man moved to the top of the dugout steps in anticipation. Werth watched the race until it became clear that Teddy had no chance, then turned back to the dugout and waved in disgust.

The open disdain demonstrated by Werth was noted immediately by Nats followers across Twitter, and by the MASN broadcast team, who replayed the brush off in the bottom of the 4th inning.

Overnight, Werth has brought a spotlight onto the nearly five-year shut down of Teddy by Nationals officials who persist in denying any conspiracy.

What pushed Werth to suddenly “come out” Friday night in favor of letting Teddy Win? Perhaps it was that night’s race, which may have been the most blatant example ever that the Nats will help Abe cheat at the expense of Teddy Roosevelt.

Lincoln was dressed as pro wrestler Randy “Macho Man” Savage, and halfway through the race, his hat fell down over his face, blinding the 16th president.

No sooner had the hat slipped than a member of the Nationals mascot team raced onto the field and helped push Abe to the finish line. Race judge Screech turned the other cheek and failed to disqualify “Honest” Abe, who was awarded the victory.

Screech has disqualified Teddy for a myriad of reasons, including unnecessary roughness, cutting the corner, and even running when he should be walking. Lincoln, who has a track record of pushing and shoving his way to victory, has never been disqualified.