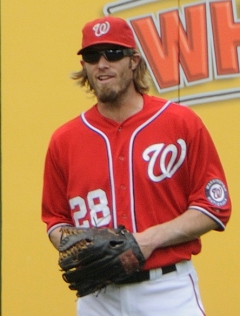 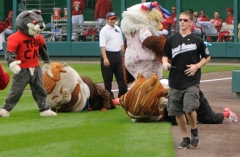 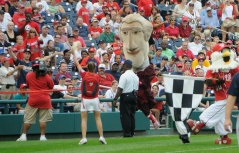 After Werth proclaimed that ““If Teddy can’t win, then no one wins,” speculation was rampant that one of two things would happen: either the Nats would succumb to popular pressure, or Werth would make a third attempt to secure a Bull Moose victory on his own.

But just before Sunday’s first pitch, Werth was asked privately about his plans, and his answer revealed all readers need to know about the anti-Teddy conspiracy in the Nationals front office.

Whatever talking-to Werth received from Nationals management, and despite any assurances he gave them, it was clear nonetheless when Sunday’s race began that they weren’t taking any chances on another coup attempt in the season finale.

As the presidents were being introduced, the Nationals trotted out That Cat to patrol the first base line, flexing his muscles as if to dare Teddy to try to cross his path. Momma Screech stood by as well, in case reinforcements were needed.

As added protection against another right field revolt, the Nats moved the finish line to the third base side. After Washington, Lincoln, and Roosevelt began their usual route, Jefferson came out and bolted the other way towards left field and the new finish line.

As That Cat took down Tom, Abe, and Teddy in succession, Thomas Jefferson cruised across the tape uncontested.

Tom’s victory moved him into an improbable and first-ever season-ending tie with Abe Lincoln for the 2011 presidents race crown. If not for Werth’s antics on Saturday, Jefferson would have had the opportunity to win the title outright.

Meanwhile, the team’s rebuke of Werth is a rude awakening for Teddy fans who had hoped for an end to the conspiracy. After 441 races, the Rough Rider will enter the 2012 season without a single win, and the powers that be at the Nationals appear hell-bent on keeping it that way.