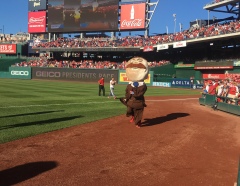 There could not have been less drama in the 81st and final presidents race of the Washington Nationals’ 2017 regular season.

While some are predicting a Roosevelt victory in the playoffs, others seem to be pleased that the team is putting the squeeze on the bull moose until they win a playoff series, and perhaps longer.