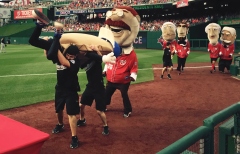 Saturday’s sellout crowd of over 41,000 will forever remember being witness to Max Scherzer’s near-perfect no-hitter — a performance so dominant that it’s easy to forget the “supporting cast” that made the victory possible: the big RBIs from Tyler Moore, the towering Bryce Harper home run, the spectacular defense by Danny Espinosa and Michael Taylor.

In similar fashion, the Nats racing presidents relied on their supporting cast to vanquish the visiting pierogies from Pittsburgh during Saturday’s fourth inning presidents race.

The presidents never go anywhere without their “Secret Service” agents, but the men in black usually keep a low profile.

However after Pittsburgh’s racing pierogies came to town Friday and once again tried to wreak havoc on the fourth inning ritual, on Saturday the agents’ role was elevated.

As they circled the warning track, the agents slammed the visiting dumplings into the dirt, leaving an almost-clear path for the commanders-in-chief.

But Theodore Roosevelt’s longtime nemesis Potato Pete had stayed behind, and as Teddy led the pack toward the finish line, Pete launched himself at the Rough Rider from a folding table.

That’s when the Secret Service agents intercepted Pete and slammed him into the stands in Section 134-A.

As the pierogie lay writhing on his back in the handicapped section, our 26th president barreled ahead to claim his fifth presidents race victory of 2015.

The pierogies will be back on Sunday, giving Potato Pete one final chance to take down Roosevelt at Nationals Park this season.