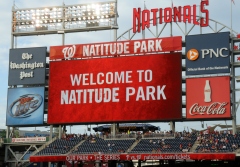 When the Washington Nationals introduced their much-misunderstood “Take Back the Park” program in February, and followed it in March with their 2012 Natitude marketing campaign, they put a lot on the line.

In shining a spotlight on past indignities, team president Andy Feffer left little room for error.  A poor start by the team or an overwhelming invasion by Phillies fans, and the Nats marketing team would be under major heat.

On Friday night, the Nationals doubled down on their brash marketing approach, renaming the stadium “Natitude Park,” and passing out “Our Park” signs to fans at the bottom of the stands.

Like it or not, the Nationals relentless marketing had an impact, as the term “Natitude” passed even “DC” and “Mitt Romney” among trending topics in the DC Twitterverse.

With group ticket sales curtailed, Phillies fans were dispersed throughout the ball park, and various attempts to start Phillies cheers were quickly drowned out by a packed house of Nats fans who clearly got the message, repeatedly drowning out the Phillies cheers every time they started.

The racing presidents ignited their Natitude by running through a giant hashtag to start their fourth-inning race. Apparently George Washington brought more Natitude to the table than his opponents, running away with the victory.

Before the game, rumors were flying from inside the stadium that the Nationals might let Teddy win if the game was a sellout.  It wasn’t, but it’s still very possible for Saturday afternoon, when the busloads arrive from Philly.