If you’re like most Americans, you’re facing two big decisions right now: 1) what to get friends and family for the holidays, and 2) which political party to support in 2012.

I’m happy to report that Teddy Roosevelt’s Progressive Bull Moose Party is back to solve both of these problems. 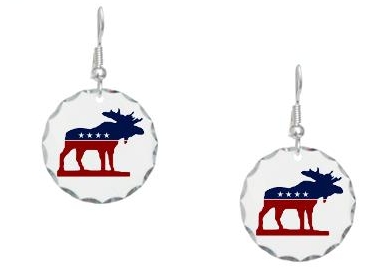 Inspired by Let Teddy Win supporter Jayson Werth, who tried twice to interfere with the presidents race on Teddy’s behalf before famously declaring “I must be the last remaining member of the Bull Moose party,” we introduce an entire new Bull Moose Party section at LetTeddyWin.com.

Remarkably, 2012 marks the 100th anniversary of the Progressive Party, founded by Teddy Roosevelt and nicknamed the “Bull Moose Party” after Roosevelt was shot in a failed assassination attempt and later declared “I’m fit as a bull moose!”

The party was formed by the popular former president to challenge his successor, fellow Republican William Howard Taft, whom he feared had drifted too far to the right.

Among other things, the Progressive platform of 1912 promoted social insurance, disclosure of campaign contributions, registration of lobbyists, and government regulation of the securities industry. Yes, some things haven’t changed much in 100 years.

The Bull Moose Party 2012 section is filled with new designs and items promoting a simpler platform for 2012: “Let Teddy Win!”

New items at the shop include jewelry, christmas ornaments, clocks, laptop skins, iPad covers, water bottles, nightshirts, pajamas, baby items and much more including, of course, lots of t-shirts in all shapes and sizes.

It’s been nearly two years since I last mentioned the store, so with over 150 new items, it seemed worth a post. As always, your purchases support this blog with a markup of a few dollars, sometimes less. I wish Cafepress prices were lower, but everything is backed by their no-questions-asked satisfaction guarantee.

A side note: It’s gratifying to see our readers wearing Let Teddy Win! gear at Nationals Park. The movement is strong, but oddly, our t-shirts have started showing up in some strange places. Who is this guy? (Warning: misogynist video not suitable for children).

UPDATE: CafePress has a coupon code FB50 which can be used today for free shipping on orders of $50 or more.