Washington Nationals right fielder Jayson Werth has made no secret of his disgust at the conspiracy that is the Teddy Roosevelt’s losing streak in the fourth-inning presidents race. 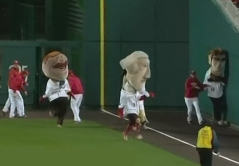 On Friday night at Nationals Park, Werth took matters into his own hands, staying on the field after the top of the fourth inning, and leading his own conspiracy of Nationals players who interfered on Teddy’s behalf.

With Abraham Lincoln in the lead heading towards right field, Werth stepped onto the warning track, jumping in front of the pack, and shoving first Abe and then George Washington to slow them down.

If that wasn’t bizarre enough, a half dozen members of the Nationals bullpen were waiting to storm the field right behind Werth, and again shoved George and Abe enough to slow them down; but Thomas Jefferson ran onto the grass and cut the outfield corner, evading Werth and the cadre of pitchers to break away from the pack and steal his fourth victory in a row.

(I haven’t been able to figure out which bullpen pitcher it was who managed to slam Abe into the outfield wall. Whoever it was is my hero for life.)

At race end, the presidents gathered at the finish line with Nats mascot Screech to pay a tribute to Nationals Executive VP Bob Wolfe, a former Atlanta Braves exec who is moving back to the Braves next season.

The signs, which spelled out “We will miss you Bob!,” led to a sudden burst of tweets wondering whether MASN play-by-play announcer Bob Carpenter was leaving the team.

Meanwhile, TJ’s win streak has pulled the founding father within one victory of 3-time champion Abe Lincoln with just two games to go. Expect fireworks this weekend as the presidents close out their season.

Two videos of the event, including this one from the MASN broadcast: