Apparently, Captain Andy Hillstrand of Discovery TV’s Deadliest Catch got to know Teddy Roosevelt on Saturday when he visited Nationals Park to throw out the first pitch. 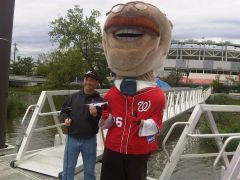 When the Nationals returned to take on the Florida Marlins Sunday afternoon, Roosevelt was nowhere to be found. As the presidents entered the field for their 4th inning race, Teddy appeared on the HD scoreboard. He was still out fishing for Marlin with Captain Andy.

“Me and @capt_andy went fishing today,” Teddy tweeted later. “I totally forgot about the race! Oops!”

The presence of Marlin in the Anacostia River wasn’t the only eyebrow-raising development in Sunday’s race. Thomas Jefferson took his third straight presidents race to suddenly make things interesting in the season standings.

With Abe Lincoln’s lead narrowed to just two games over Tom, the Nats will return to DC next weekend for their final three-game series.