The Nationals nearly pulled off the comeback win Wednesday night against Roy Halladay and the Philadelphia Phillies, but as Teddy Roosevelt has learned time and time again, close isn’t quite enough.

With the Ringling Brothers Barnum & Bailey Circus in town, the Nationals had announced that the famous clowns would be at Nationals Park to participate in the fourth-inning presidents race, but what transpired Wednesday night was more Fellini than Bozo. 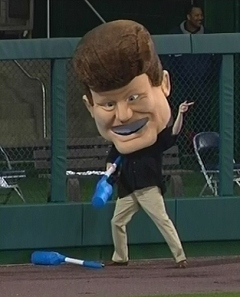 The strange affair saw presidents getting picked off one-by-one as they attempted to traverse a bizarre obstacle course that included a first-ever appearance by a fifth president.

As the presidents entered the field, PA announcer Jerome Hruska introduced the “American presidential gladitorial race.” After navigating around a circus clown positioned in the outfield, the presidents ran into a super-sized John F. Kennedy, who knocked George Washington to the ground. A Nat Pack member then took out Abe, leaving Teddy and Tom to break through two giant paper doors. Alas, Teddy picked door #2, where he was tackled by members of the grounds crew.

It remains to be seen whether Kennedy will make repeat appearances at Nationals Park. JFK, of course, is not on Mt. Rushmore, and Wednesday night he did not wear a uniform or compete in the race.