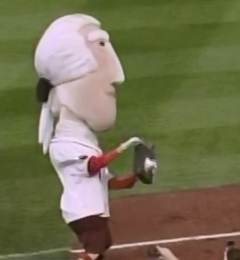 It’s safe to say that most fans who came to Nationals Park to see the Nats sweep the New York Mets did not know that they were also celebrating National Camera Day; but when it comes to obscure celebrations, the Nats faithful can always count on the racing presidents.

On Wednesday night, it was Thomas Jefferson’s turn to educate the masses, and steal a victory in the process.

The Sage of Monticello stayed on the sidelines for the fourth inning race, but as the field approached the home stretch, TJ appeared from the stands holding a giant camera, and stopped his fellow presidents in front of section 134 to pose for a photo.

As the others primped and posed, Jefferson slowly backed up, then tossed the camera in the air and turned to dash for the finish line.