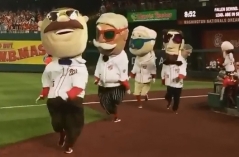 The Washington Nationals returned to DC Monday night to kick off a homestand vs. the New York Mets on — what else? — National Sunglasses Day. Of course, the racing presidents did not pass up the chance to celebrate.

Visiting president Herbert Hoover started the fourth inning race with a big lead, but had apparently forgotten his sunglasses.

Herbie was blinded and stopped in his tracks as Teddy Roosevelt and the other presidents sped by.