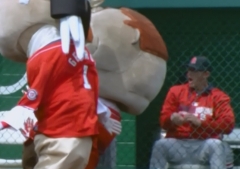 Running the wrong way seemed to help the team on Friday night, so on Saturday afternoon at Nationals Park, the racing presidents took off toward the third base side again, but as was the case in the game vs. the Cardinals, things got ugly quickly.

Teddy Roosevelt had an early lead, but as the presidents passed the visitors’ bullpen, George Washington slammed Teddy into the fence, to the surprise and horror of the Cardinals’ relievers.

Roosevelt fell to the ground, and oncoming presidents Abe Lincoln and Thomas Jefferson tripped over him. With his competition dispatched, George Washington managed to avoid disqualification and cruised to an easy victory.