With a losing record since Teddy Roosevelt first tasted victory in October, the Washington Nationals came to the conclusion Tuesday that something’s not working and shook up the roster to try to recapture some of their 2012 mojo. 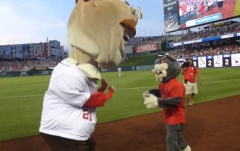 If Wednesday’s fourth inning antics were any indication, they came to the same conclusion regarding the presidents race.

Following a familiar script from the previous six seasons, Teddy Roosevelt jumped out to a big lead that he extended into the home stretch.

Ignoring his recent victories, Nationals PA Announcer Jerome Hruska intoned “This could be the day. C’mon Teddy!,” before Teddy’s longtime nemesis “That Cat” appeared to block the finish line and tackle the Rough Rider to the ground.

Completing the narrative and adding insult to injury, the trailing president was Abe Lincoln, with only one win to his name this season, stealing the victory as Teddy lay on the ground.

Abe’s win pulled him into a tie with Teddy for last place in the presidents race standings.