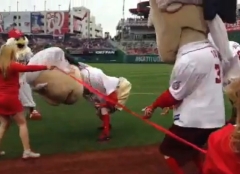 With the first short homestand of the season wrapping up Thursday afternoon at Nationals Park, George Washington and Thomas Jefferson stood alone atop the presidents race standings, and apparently they want to keep it that way.

During the fourth inning presidents race, the two founding fathers colluded to systematically knock out their competition, slamming Abe Lincoln into the outfield wall, tripping Teddy Roosevelt in the right field corner, and slamming William Howard Taft to the ground in the home stretch.

The final tackle took George down as well, but rather than cross the finish line, Jefferson waited for the first president to come to his feet to be handed the victory.

What Jefferson gets in return remains to be seen, but the newest president Taft is not taking it lightly.

“Collusion, I say!,” he tweeted after the race. “Fine then, it appears that I need to find a partner before the next race.”

Both Teddy and Taft remain winless.