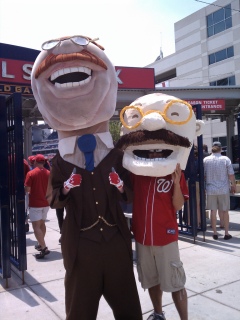 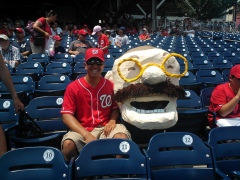 Each October, readers write to ask where they can get a Teddy Roosevelt costume, and I’ve never had a good answer. Finally, Nationals fan Wade Chi took matters into his own hands.

“It took about 8 nights spread across a few weeks,” Chi told me, “[but] this
past halloween, i made a giant racing Teddy head and went around Arlington as Racing Teddy.”

Using “chicken wire, Elmers glue, newspapers, and a bunch of paint,” Chi pulled off what others only dream of.

He wanted to get a photo in his costume with the real racing Teddy Roosevelt, but Chi wasn’t sure he’d be allowed to bring the costume into Nationals Park, and couldn’t get an answer from the Nationals.

Finally, on Sunday, Chi decided to just show up and give it a try.

He was turned away by security at first, but was persistent, and a wise Nationals Park supervisor let him in. A full account can be found on his blog.

Given last weekend’s brutal heat, Chi didn’t keep the costume on for long, but he got what he wanted — a photo with the  Bull Moose himself.

Check out Chi’s full account of the building process from last October, including this time lapse video.