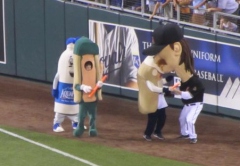 Finally, running anchor for their respective teams, were the Washington Nationals’ own racing president Teddy Roosevelt (wearing his road grays) vs. Bratwurst of the famous Milwaukee Racing Sausages.

After being handed a big lead by teammate Randy Johnson, Teddy Roosevelt had his rival sausage beaten on the anchor leg, but stopped just short of the finish line and turned to face a more tempting target.

Teddy flattened the advancing Bratwurst, drawing cheers from the 38,000 screaming fans at Kaufman Stadium, but alas, as Teddy stood over his victim in triumph, Relish knocked down Teddy.

Bratwurst got up, stumbled over the finish line, and was declared the winner.

Thanks to @gordonmack for the quick video, and to espnW’s intrepid Amanda Rykoff for sending these terrific photos instead of sleeping.

Any other videos out there? Let me know.