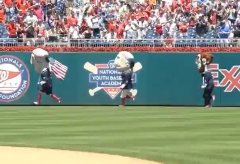 Zimmerman delivered with a homer and three RBI, making him 10 for 20 with 13 RBIs in six Independence Day games.

And for the third year in a row, founding father Thomas Jefferson, scribe of the Declaration of Independence, led the 4th inning presidents race wire to wire, carrying an American Flag all the way.