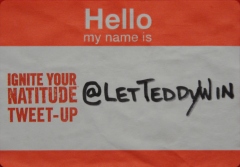 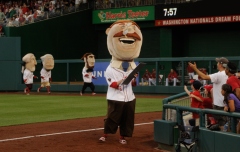 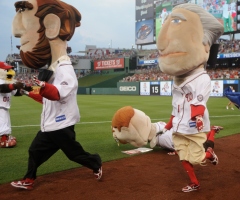 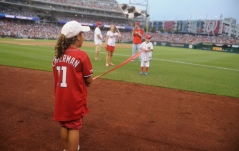 The Nationals celebrated the first “Ignite Your Natitude Tweetup” at Nationals Park Tuesday night, as the team kicked off its final homestand before the All Star break.

Among the near-sellout crowd were over 700 Twitter users who RSVP’d to the event, filling section 140 and collectively doing their part to bring local cellular networks to their knees.

Participants who registered in advance via Twitter were treated to a variety of surprise gifts and experiences, from posters to t-shirts to opportunities to leave their seats and rub elbows with Stephen Strasburg and yes, Teddy Roosevelt.

The 26th president participated by tweeting before and after the 4th-inning race, and by posing with tweetup participants afterwards.

Unfortunately, Teddy tried to tweet during the race as well.

When the gates opened, TR emerged carrying an oversized Curly W cell phone.  He surged ahead to a huge lead, which he held into the home stretch.

But then he tried tweeting.

Fans following @Teddy26Nats saw Teddy’s tweet as he approached the finish line looking at his phone:

And with that, the Hero of San Juan Hill tripped and executed a face plant along the first base line.  Abe stole the win.

The team continues to use the racing presidents to promote All Star voting, and Tuesday night enlisted the Rushmore Four to hold signs up after the race imploring fans to use hashtag #BryceIn12 and cast their vote for Bryce Harper in the MLB “Final Vote” contest.

The effort to get out the vote has certainly had an impact on young Nats fans Jackson Fleischauer and Corbin Haviland, who won the opportunity to hold Tuesday night’s presidents race finish line. All they had to do was fill in 10,000 paper All Star ballots.

Finish line video below, but first, Bob Carpenter’s call (he was a bit confused):