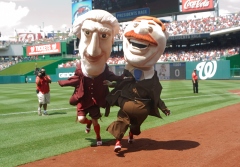 The Nationals’ conspiracy against Teddy Roosevelt was on full display Sunday at Nationals Park, as Thomas Jefferson flaunted the rules to steal a race from our favorite president, yet avoided disqualification.

Over the years, it’s been president #16 Abe Lincoln who has built up a reputation for cheating, but something got into Jefferson Sunday, as the Sage of Monticello went on a rampage, first slamming George Washington into the outfield wall, then pushing aside Abe Lincoln in the corner.

That left only Roosevelt to beat, and the crowd roared with anticipation as Teddy surged ahead in the home stretch, but just before the finish line, Jefferson reached out and shoved Teddy to the ground. There was nothing subtle about it, yet Screech declared Jefferson the winner.

The double standard was not lost on MASN play-by-play announcer Bob Carpenter. “I think we should find out why Screech did not disqualify Tom Jefferson,” he said on the broadcast, “because Teddy, in my opinion, won that race. Inquiry!”