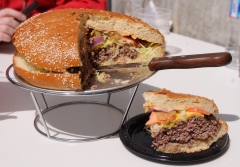 After taking their first two series on the road, the Nats bring a winning record back to DC Thursday to kick off what many hope will be a new era noted for Curly Ws on South Capitol Street; but the changes in store for the home opener at Nationals Park go beyond the team’s winning ways.

Nationals Park food offerings have once again been updated in the off-season, with the most press going to the 8-pound Strasburger, a monstrous $59 offering meant for sharing and available only for select games at the Red Porch restaurant above center field. It will make it’s debut on opening day.

The Taste of the Majors stand behind section 117 has once again received a menu update with new and constantly-changing dishes that represent the visiting team. Look for 5-way Cincinnati Chili for the opening series against the Reds.

The Union Square restaurants along the Miller Lite Scoreboard Walk are adding a number of menu items, including hot dogs, pies, and Sweet Frites at Box Frites, Quesadillas and Churros and El Verano Taquería, and a fried chicken sandwich at Blue Smoke. 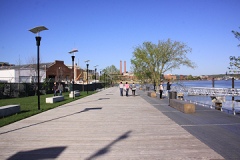 A turning point for the neighborhood

Outside the First Base gate, the long-envisioned river views from Nationals Park are finally beginning to take shape, as the Florida Rock cement factory that stood between the stadium and the river has finally been demolished.

For the first time, fans can walk along the river from a new bridge by Nationals Park to the new Yards Park development, including the Foundry Lofts building, which houses the first of several new restaurants.

Before and after the game

On the opposite side of the field, the Half Street Fairgrounds makes its debut just across from the Centerfield gates, on the block formerly occupied by The Bullpen. The Half Street block is now dotted with an array of brightly-painted shipping containers stretching from M to N Streets, with each containing a different local food stand. Look for trucks from Bayou and Surfside, plus Red Hook Lobster Pound, DC Empanadas, Curbside Cupcakes, Tasty Kabob, Big Cheese, and others, with live entertainment before and after games. Fairgrounds owner Jason York told ABC 7 News they are “combining Eastern Market with food trucks.”

Parking around Nationals Park remains a great value. Prices did not go up, and lots are as cheap as $5 if you’re willing to walk 10 minutes up South Capitol street. In previous seasons, availability has not been a problem, but lots fill fastest for sellout weekday games such as Thursday’s opener, so plan ahead.