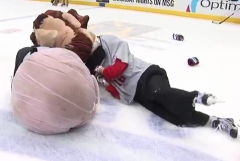 Following Saturday’s racing president auditions, the Washington Nationals took to the road to bring the presidents to New York for their annual appearance at a New York Islanders Presidents Day hockey game at Nassau Coliseum.

Donning ice skates, the four presidents raced around the ice until George slammed Teddy into the visitor’s bench. Teddy retaliated by jumping from the bench into the other three presidents, knocking the entire field to the ice.