Jennifer Kushlis loves Teddy Roosevelt. In fact, her love for the Washington Nationals’ racing president runs so deep that her boyfriend of six years, Matt Hendrickson, decided he would have to literally win her affections from Teddy before asking for her hand in marriage.

“I absolutely love the Presidents’ Race,” Kushlis said. “It’s the highlight of my summer, several times over.” 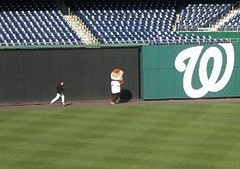 But Matt was up for the challenge. After nine months of planning, it all came together Sunday at Nationals Park.

Kushlis, 27, an Account Director at a local PR firm, arrived at their Kalorama home to find a note announcing that a Town Car would be arriving shortly to pick her up.

The driver whisked her directly to Nationals Park, where a Nats employee met her and led her onto an empty field with a table set behind home plate.

That was the cue for the HD scoreboard to light up with a video in which Hendrickson explained his dilemma, and challenged Teddy to a race for her affections.

“I realize that you have strong feelings for another man,” he explained. “Teddy and I both know that it would be impossible to ask you to choose between us, so we’ve talked and decided that the only way to settle this once and for all is with a race.”

With that, Teddy appeared from the centerfield gate, followed closely by Hendrickson.

“[The video] was absolutely hilarious,” said Kushlis, “and the only thing that kept me from sobbing through the whole event.” 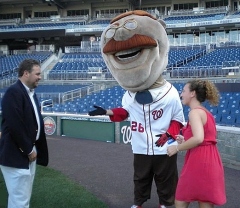 Teddy put up a good fight, but Matt won the day, and when Jennie met him at the finish line, he got down on one knee and proposed.

The families of both DC natives had been hiding on the Nationals Park concourse, and when Kushlis accepted, the celebration began.

“It was, by far, the best day of my life,” said Kushlis. “Matt’s incredible. The proposal was truly the best ever.”

Hendrickson, who works for Washingtonian Magazine, began scheming up the proposal during last year’s baseball season. “As my jealousy over Jennie’s love for Teddy grew, the idea to race him for her heart emerged,” he said. “Having survived an earthquake and a hurricane the week of my big plan, I felt like it was meant to be.”

Hendrickson has nothing but praise for the Nationals and Director of Ballpark enterprises Maggie Gessner, who coordinated everything.

And what of the jilted Teddy? “He’s a great sport,” said Hendrickson. “Teddy was first class.”

No wedding date has been set, but as the planning begins, says Kushlis, “I wouldn’t put it past Matt to involve Teddy somehow.”

Meanwhile, she hasn’t lost her love for the hero of San Juan Hill, saying his huge smile is what separates him from the other presidents. “George and Tom are hard to tell apart at times, and Abe looks so stern. Teddy’s the one in the bunch you’d want to have a beer with.”

Now that she’s engaged, that’s the best Teddy can hope for.

Matt’s video is above. We’ll have the full video of Sunday’s events in a few days.

UPDATE: The full video, including Jennie’s amazing reactions, is now up here

Photos courtesy of Michelle Kushlis except where noted.