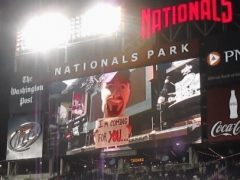 Arizona Diamondbacks TV analyst and “Racing Legend” Mark Grace responded to Wednesday night’s challenge with one of his own in the final race of the homestand Thursday night.

Just then on the HD scoreboard a video feed appeared of the Arizona Diamonbacks’ “Racing Legend” Mark Grace, holding a sign reading “Hey Teddy, I’m coming for you… We’ll see you in 2012.”

It appears we’ll see some Legends vs. Presidents action in the 2012 season. If so, it seems either Teddy or Mark will have to win.

After the race, the Nationals presidents met up with the real Mark Grace in the broadcast booth, where he was covering the game for Fox Sports Arizona.