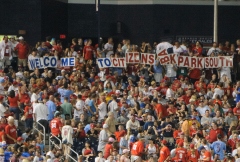 An all-time record crowd of 44,675 squeezed into Nationals Park Saturday night, but everybody on the field, including Teddy Roosevelt, appeared to have nothing left after Friday night’s late-inning heroics.

It was estimated that as much as 50% of the standing room only crowd hailed from Philadelphia, but with the Phillies staking a 5-0 lead, and the Nationals doing nothing but squandering opportunities, the mood felt increasingly like a Phillies home crowd as the night wore on, capped by a group of fans in the outfield who held signs spelling out “Welcome to Citizens Bank Park South.”

In the fourth-inning presidents race, Teddy Roosevelt finished in last place for the second night in a row, as George Washington sneaked by Thomas Jefferson for the victory. Teddy seemed ready to admit that the race is fixed against him, tweeting after the race “Drats, foiled again!! If only I could race a vegetable or something!”

The night also featured a change to the presidents race introductions. For the last four seasons, Nationals Park P.A. announcer Jerome Hruska has intoned “Ladies and Gentlemen, it’s time for the main event. It’s the GEICO Presidents Race!” Hruska’s bold introduction is the subject of much derision by fans who take offense at the notion that something other than the game would be called “The Main Event.”

While the unfortunate phrase didn’t change, the emphasis did, at least for one night. Fans on Saturday were instead greeted by a new video featuring the sponsor’s soft-spoken Gecko. It may not satisfy the critics, but it was a nice clarification between between the voice of the team and that of the race’s commercial sponsor.