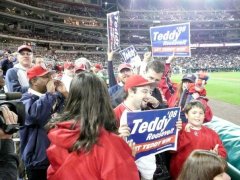 The Let Teddy Win fans were out in force on Tuesday night to watch the Nationals win their penultimate home game of 2009.

An ABC News crew was on hand in Section 131 to document Teddy Roosevelt’s travails in the presidents race, and the Bull Moose did not disappoint (or did, as the case may be…).

Teddy maintained a slight lead through the first half of the race, but faded down the stretch, finishing a distant last as George Washington and Thomas Jefferson each helped pull Abraham Lincoln into the lead to take his 40th victory of the season. To celebrate, Abe led George and Tom in a presidential bunny hop along the first base line.

Wednesday’s season finale is being billed as Fan Appreciation Day, with free fleece blankets and countless other giveaways throughout the afternoon. Rumors are flying about the presidents race finale’. George and Tom remain tied for second place entering the game, but the real story is whether Teddy will pull out a season-closing victory.