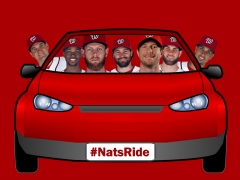 UPDATE: On Thursday, Pepco parent Exelon has funded an additional hour of operating time for the Metro. Times have been updated below.

The Washington Nationals return to DC Thursday for a deciding NLDS playoff game 5 vs. the Chicago Cubs. However, with an announced start time of 8:08pm, just over 4 hours before the last northbound train departs from the Navy Yard/Ballpark station, fans who rely on Metro face the possibility of choosing between sticking around for a late or extra-innings clincher and getting home at all.

As soon as the game time was announced, fans began using the Twitter hashtag #NatsRide to connect with fans who planned to drive and are willing to share a ride home in exchange for sharing the cost of parking and gas.

The system was created in 2016 by our friends at the TalkNats blog and was a huge success when the Nationals faced a similar late weeknight game. Fans with cars used it to share the cost of driving. Fans reliant on Metro used it to find transportation home.

To take advantage, simply use the #NatsRide hashtag in a tweet and be sure to include the name of the neighborhood you’re trying to get to after the game.