After much speculation that Franklin Roosevelt would join the Washington Nationals racing presidents for the 2017 season, the team acknowledged today that it would not happen.

In a statement this morning, a team spokesman said “While we engaged in extensive efforts to have FDR as a visiting Racing President for the 2017 season, in light of logistical challenges and lack of enthusiasm from the Roosevelt family, we were not comfortable proceeding.” 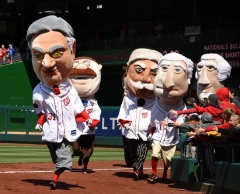 The announcement suggests that the team’s multi-year promotion with the White House Historical Association will not include a visiting racing president for the upcoming season. In 2015 and 2016, the organization celebrated Calvin Coolidge and Herbert Hoover, respectively, and the NATS featured them as visiting” racing presidents.

The WHHA will be celebrating Franklin Roosevelt throughout 2017. Meanwhile, “Cal” and “Herbie” have “retired” to the team’s Grapefruit League spring training facility in West Palm Beach.