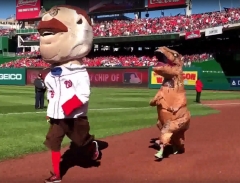 When the Washington Nationals were a perennial loser, many blamed the curse of Teddy Roosevelt; but the narrative switched after 2012, and fans began to believe that the Nats couldn’t win a playoff series precisely because they had let Teddy win.

So on Sunday, with Roosevelt having won the presidents race in each of the team’s six historic playoff games, the team conspired to prevent a recurrence.

The race began innocently enough, as the presidents stopped on the warning track to entertain the fans with some dance moves.

When the music stopped, Teddy got the early jump and dashed toward the finish. That’s when one of the dinosaurs from Friday’s race emerged from the stands to chase Teddy down.

The T-Rex was clearly supposed to stop Teddy short of the finish line, but the Bull Moose was too much to handle, and Teddy broke the tape as he fell.

What happened then stunned the crowd, and judge Screech and PA announcer Jerome Hruska followed the script and declared Thomas Jefferson the winner anyway.

@Teddy26Nats won the #Nats #NLDS presidents race, but they awarded the win to Jefferson — a botched attempt to reverse the alleged curse? pic.twitter.com/h5rgKOpCnd