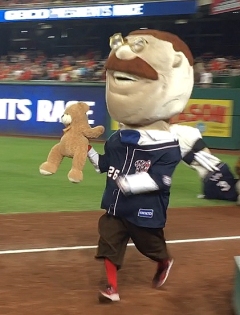 It’s presumed that the Secret Service is supposed to protect our presidents, but on Friday night at Nationals Park, the Nats’ mascot handlers, who wear “Secret Service” jerseys, conspired with racing president Teddy Roosevelt to take out the competition.

It was National Teddy Bear Day, and so as the race began from center field, Roosevelt appeared from the tunnel below section 134 and could be seen directing his Secret Service Agent Wooddell into the stands in the right field corner, carrying a large Teddy bear.

As the competition hit the home stretch, the secret service agent threw the Teddy bear from the stands and nailed lead runner William Howard Taft in the nose, knocking him over and toppling the others like dominoes.

The Bull Moose picked up the prize Teddy bear and bolted for the finish, then carried the bear around the park for the rest of the night.