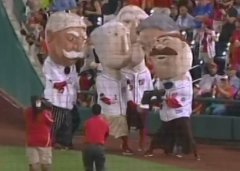 The same night at Nationals Park, the Park Service returned the favor by having park rangers on hand to helping Roosevelt take in the sights during the 4th inning presidents race.

Teddy snapped photos with his giant camera, then distracted his fellow presidents with the pictures so that he could break toward the finish line.

Teddy stole the win, but Olympic gold medal wrestler Helen Maroulis stole the show. The Rockville native had been holding the presidents race finish line, and won over the crowd by picking up the giant racing president in celebration after the race.