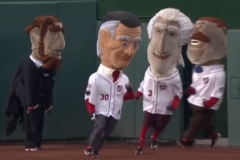 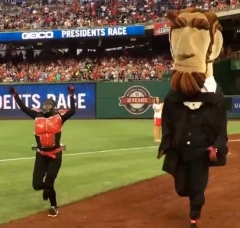 The Nationals presidents race has a history of borrowing from popular culture. Friday was the release date for the feature film Ant Man, and racing president Abraham Lincoln wasted no time jumping on the summer blockbuster bandwagon, recruiting the diminutive superhero to help eliminate his competition.

“Honest” Abe emerged first from the tunnel for the fourth inning race wearing his black formal suit usually reserved for Sunday races and sporting an unusual bulge on his back.

No sooner had the five other racing presidents followed wearing their white home uniforms, then Ant Man emerged from under Lincoln’s cape.

The action star proceeded to chase after each of the racing presidents and knock them out one by one with flying leaps.

He caught Teddy Roosevelt last and wrestled him to the ground, then escorted Lincoln across the finish line.

Video below featuring the race as called by Nats PA announcer Jerome Hruska, followed by our finish line video.