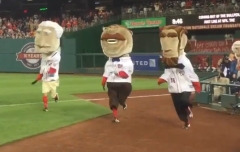 On Tuesday night, the presidents continued their season-long tribute to ten years of National history as the original four presidents — Washington, Jefferson, Lincoln, and Roosevelt — started the race once again from the right field corner.

William Howard Taft, who didn’t join the Rushmore Four until 2013, didn’t get the memo, starting instead from the centerfield gate. Taft never had a chance, and Abe won the short sprint to the finish.