It’s hard to say what got the Rushmore Four riled up Tuesday night, but after watching fellow racing president William Howard Taft cross the finish line at Nationals Park, the Nats’ remaining racing presidents decided to gang up on the GEICO Gecko. 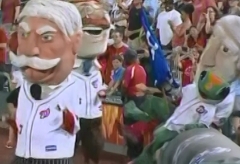 The sponsor, who helps out at the finish line nightly, is usually off limits to the presidents’ antics, but immediately after Tuesday’s race, Thomas Jefferson pushed the amphibian insurance salesman into the Grounds Crew’s tarp in foul territory.

The slippery mascot evaded Jefferson, who got stuck behind the tarp, but then Teddy Roosevelt charged at him, followed by George Washington, who grabbed the lizard and jumped on top of him.

Perhaps they didn’t save as much as they’d expected on their car insurance.