It was not Teddy’s finest hour. 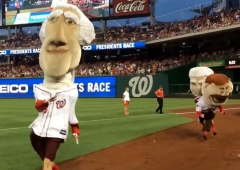 In the first presidents race after the All Star break, Teddy Roosevelt came out swinging Friday night at Nationals Park, turning on his fellow presidents before they even finished coming out of the centerfield gate.

The Rough Rider shoved George Washington to the ground, but failed to down his other competitors, backpedaling as Thomas Jefferson slipped by him on the warning track.

Teddy chased Jefferson for the length of the race, and cut the outfield corner to try to catch up, but Washington, who had recovered early, caught up to the Bull Moose and exacted his revenge.

It should be a fun second half of the season.