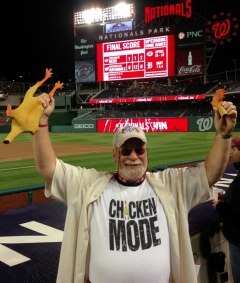 Despite outscoring opponents over the last eight games, the Nationals have won only two of those contests, and find themselves with a losing record after Monday’s 3-2 loss to the Miami Marlins.

As we’ve reported previously, Kaufman has performed the ritual “dozens of times” in the team’s ten year history. The act, which is designed to “remove bad juju” from the ball park, has become less frequent as the team has done well in recent years, but pitcher Gio Gonzalez has adopted the cause, having participated in the most recent sacrifice himself last August. Some fans have begun sporting Chicken Mode t-shirts when Gonzalez pitches.

“Our injury plagued squad has fallen below .500,” said Kaufman. “They need the extra Chicken Mode juju to help heal them, and energize our sedated bats.”

Kaufman encourages fans to attend on Tuesday. “Although it’s a work day,” he said, “I hope all Nats fans who can make it to this short ritual at lunch time, will come to help add good juju to our team.”