Teddy Roosevelt learned Thursday that Halloween is the one night of the year when a ten foot tall president at your door doesn’t surprise anybody. 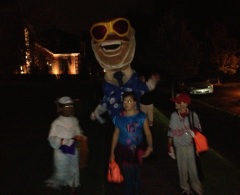 With a little help from Twitter, Lang’s Bryce Harper costume had won the fan vote in the Nationals’ Pic or Treat Halloween Costume Contest, with Teddy as the prize.

“We were far behind in the voting,” said Lang, “then I tweeted Bryce and his sister and they helped. I tweeted Holden on the radio and he helped. My family tweeted and put it on Facebook and my friends voted a lot.”

Teddy kept the spirits high despite a steady rain and a failure by most neighbors to recognize him. Watch as one after another fails to recognize the racing president, until he finally barges in on some Nats fans.

“It was so cool trick or treating with Teddy,” Jake added. I had a great time.”

2 thoughts on “Video: Trick or Treating with Teddy Roosevelt”