The cheating is getting out of hand in the Nationals presidents race, and if that sounds like nothing new, the difference vs. previous years is that now even Teddy isn’t getting disqualified. 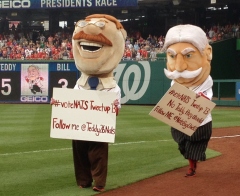 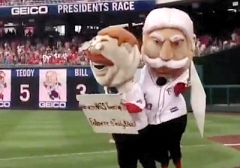 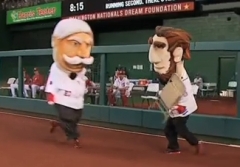 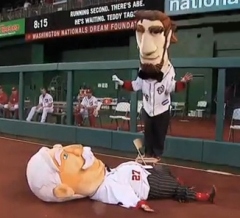 On Tuesday and Wednesday nights at Nationals Park, Teddy Roosevelt and William Howard Taft escalated their 100 year-old war, taking each other out as race judge Screech looked the other way.

The Nationals sponsored a #VoteNats Tweetup on Wednesday evening, and the team’s longtime face of Twitter Teddy Roosevelt paced the field, holding up a sign as he approached the finish line reading “#voteNATS Tweetup ’13 Follow me @Teddy26Nats.”

But Taft was trailing close behind with his own sign, and slammed the Rough Rider to the ground, taking the victory and holding up his own sign saying “No Teddy, they should follow ME @NatsBigChief27.”

Taft’s antics were simply revenge for the previous night, when Teddy had enlisted the help of longtime nemesis Abraham Lincoln to take Taft out of the competition.

On Tuesday, “Honest” Abe sat out the race — literally. When the race began, Lincoln parked himself on a folding chair on the warning track by the Nationals bullpen.

Teddy Roosevelt tore out of the starting gate and slapped hands with the Great Emancipator as he race by the bullpen.

Lincoln then stood up, folded up the chair, and swung it right into the oncoming Taft.

With the Chief Justice flattened to the ground, Abe unfolded the chair, stood on it, and taunted his victim. No disqualifications were issued.

And Taft’s take down of Teddy on Wednesday:

I was not around for the race on the 27th, but here is the video, in which Lincoln apparently celebrated the anniversary of the decommissioning of Route 66: