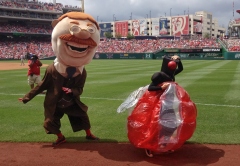 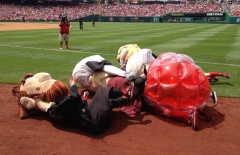 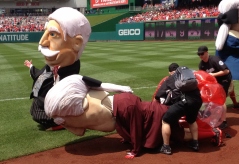 With the Nats trailing early Sunday at Nationals Park, the team needed a rally, and got inspiration from the most unlikely of places.

When the presidents race began in the middle of the fourth inning, Teddy Roosevelt lined up near the finish line, bringing with him the same giant cicada that invaded Nationals Park on June 9.

P.A. announcer Jerome Hruska introduced the big insect as “The Rally Cicada,” and this time, the cicada was on Teddy’s side.

As the remaining presidents approached the home stretch, Teddy pushed the cicada at them like a bowling ball, toppling them all, then turned towards the finish line to collect his fourth victory of the season.

The Nationals followed with a furious effort, holding the Rockies scoreless while an onslaught of Nats reserves delivered two runs in the bottom half of the inning and four more in the eighth, but it wasn’t quite enough.

A beautiful slo-mo of Teddy’s cicada tackle below.