The Nationals saluted the U.S. Military on Memorial Day at Nationals Park, with the racing presidents joining the team in donning their military-style fatigue uniforms. 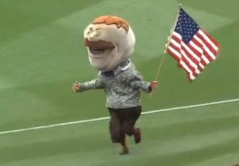 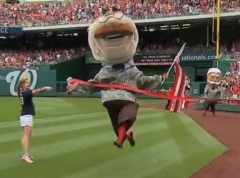 The fourth inning presidents race wasn’t so much a race as it was a salute to our nation’s soldiers. The racing presidents positioned themselves around the field along the warning track, waiting to pass an American Flag from president to president in order of their service — well, almost.

Our first military veteran president George Washington kicked things off, passing the flag to our third president Thomas Jefferson, who then handed it to #16 Abe Lincoln. The Nats thought better than to let war hero #26 Teddy Roosevelt hand the flag to #27 William Howard Taft; so it was Taft who went next, letting the leader of the Rough Riders and Hero of San Juan Hill take the honors in this least competitive of races.