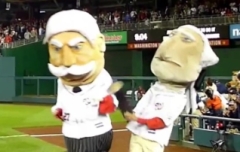 In the fourth inning, the presidents attempted to throw off the Tigers by running a relay race in which batons were replaced by cinnamon shakers. The cinnamon reference recalled the movie “The Hangover,” when the Zack Galifianakis character Alan Garner declares “Tigers love pepper. They hate cinnamon.”

Since a fifth racing president was added this year, the relay race concept was unbalanced, with Teddy Roosevelt running on his own against two teams. After Abe handed off to anchor Bill, and Tom handed off to George, Teddy tripped and fell, leaving Taft with only George to beat, but it was Washington who did the beating, taking down Taft with a single swing of the cinnamon shaker.

Inexplicably, the Nationals awarded a victory to the cheating George, but not to his relay partner Thomas Jefferson. As expected to start this homestand, the race resumed its normal direction toward the first base line.