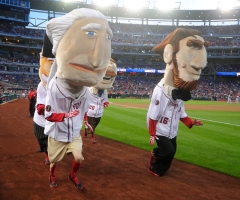 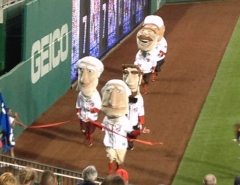 After Thursday night, when the Nats tossed a 1-hitter after the racing presidents ran backwards, the Nationals Park mascot team decided it was best not to mess with a good thing.

On Friday night, with pitcher Jordan Zimmermann on his way to a complete game 1-hitter, the racing presidents set up once again in first base foul territory to run the fourth inning race backwards.

All of them, that is, except Thomas Jefferson. As caught on video by reader Jeramy Compton, the sage of Monticello tripped in the tunnel and struggled to get up, then dashed onto the field in front of the other presidents, before the introductions were finished.

George, Abe, Teddy, and Bill waited for the starting gun, then went after the cheating Jefferson, with George Washington catching him on the warning track to take back the lead in the presidents race standings.