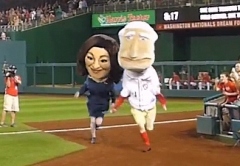 A 10-foot likeness of actress Julia Louis-Dreyfus participated in the presidents race Tuesday night at Nationals Park, teaming with Teddy Roosevelt in a relay race that came down to the wire.

Louis-Dreyfus plays United States Vice President Selina Meyer in the HBO comedy series VEEP, and to promote this Sunday’s season premier, the network partnered with the Washington Nationals to have the king-sized Meyer join the racing presidents for an official presidents race relay.

Meyer was teamed with fan favorite Teddy Roosevelt, and fans entering the center field gates were given “Teddy and Selina” rally signs to help cheer the pair to victory during the fourth inning race. Meyer posed for photos with fans before the game.

For the three-team relay, a trash-talking William Howard Taft was teamed with Abraham Lincoln, while founding fathers George Washington and Thomas Jefferson formed a second opponent.

In the first leg, Teddy Roosevelt jumped to a big lead, but dropped the baton on the handoff. By the time Selina had picked it up, Washington and Lincoln had taken off on the anchor leg.

In a reversal of roles from previous seasons, George Washington continued to stake his territory as the early leader in the dirty tricks department, pushing Abe onto the warning track in right center field.

With Abe out of the way, George saw nothing but daylight, but Selina put on a burst of speed that brought the Nationals Park crowd to its feet, briefly taking the lead in the home stretch before running out of gas just before the finish line.

The victory put further space between the founding fathers and the remaining racing presidents, who have yet to taste
victory in 2013.