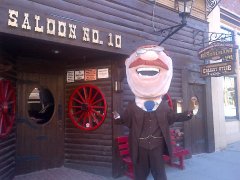 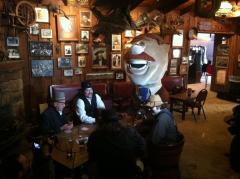 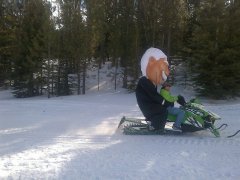 Nationals racing president Teddy Roosevelt comfortably beat rival William Howard Taft to the Black Hills of South Dakota on the eve of Presidents Day, but rather than head to Mt. Rushmore, Teddy opted to visit the Old Style Saloon #10 in Deadwood, South Dakota, where he tweeted “I just had to swing by. Hope this stop doesn’t lose me the race!”

Hours later, Taft tweeted from aboard a snowmobile, “Perfect, you stay in one place. I’ve got my eye on the prize and even found some help!”

Clearly both presidents will achieve their goal of reaching Mt. Rushmore by Presidents Day. Whether Teddy comes back to beat Taft remains to be seen, but one thing is certain. The Big Chief has a long way to go to catch up to the Rough Rider in the popularity department.

In the Nationals’ corresponding Twitter contest, Teddy’s vote count is more than double that of Bill.